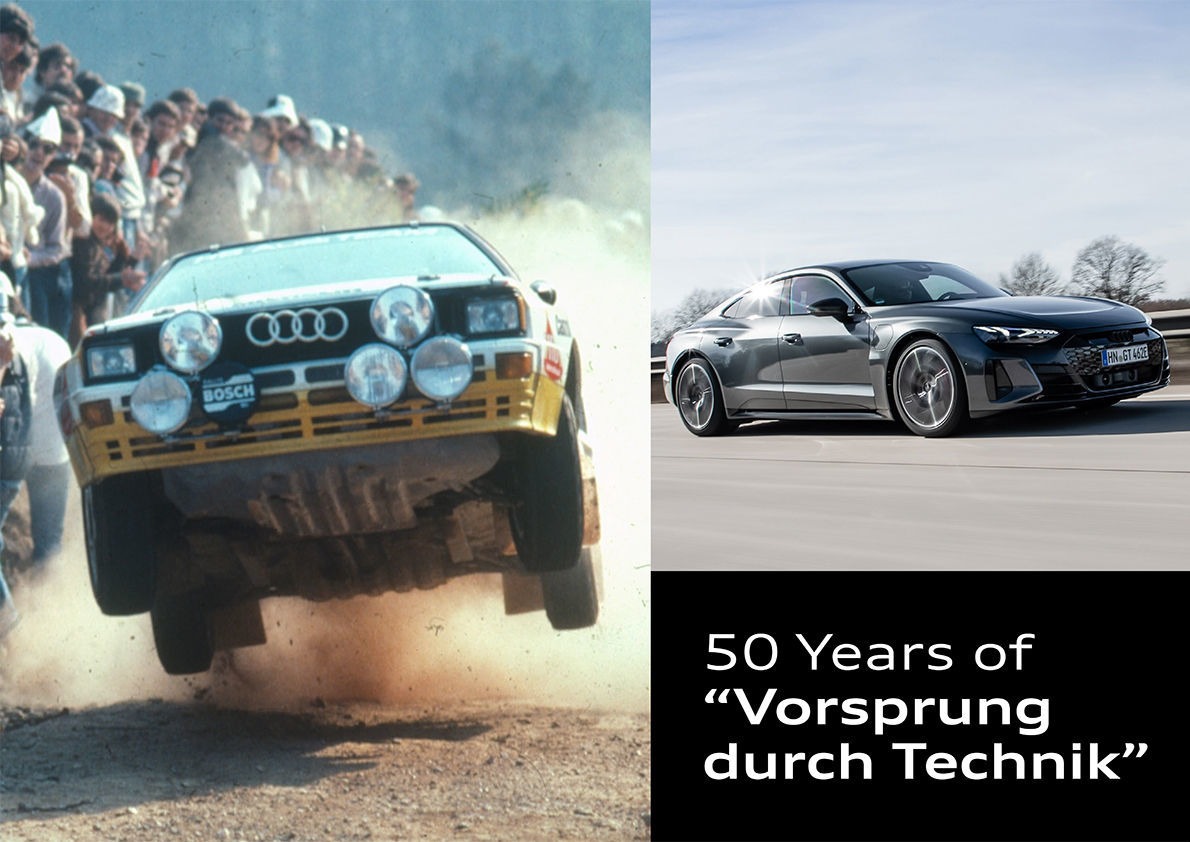 The Audi slogan “Vorsprung durch Technik” is marking its 50 year anniversary this year. Even half a century after its inception, the world-famous slogan of the Four Rings hasn’t lost any of its appeal. And each year, there’s a little bit more history behind it. On this momentous occasion, the company is looking back at a plethora of innovations over five decades that demonstrate why “Vorsprung durch Technik” isn’t just a slogan for Audi – it’s also an expression of the company’s future-oriented approach. 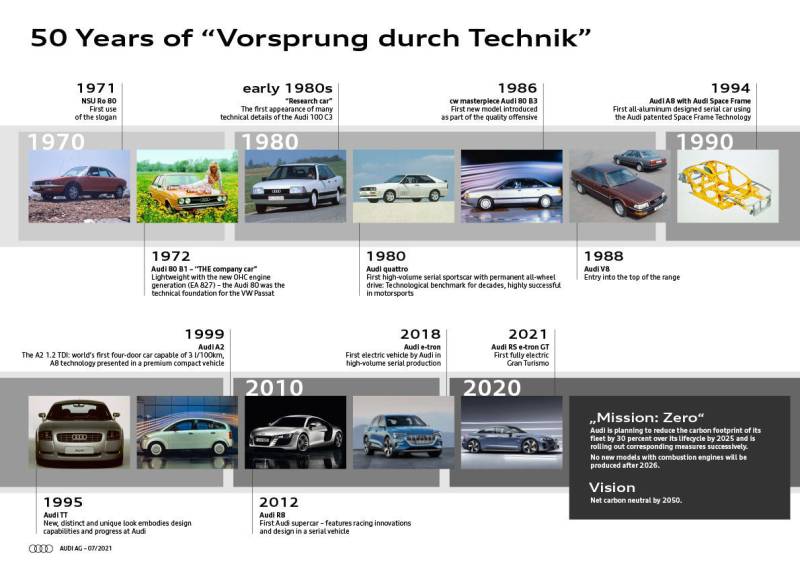 The birth of the slogan
1969 saw the merger of Auto Union GmbH, headquartered in Ingolstadt, and Neckarsulmer NSU Motorenwerke to form Audi NSU Auto Union AG at the Neckarsulm location. The new company’s range of models spanned from the air-cooled engines of the rear-wheel drive NSU Prinz series and the water-cooled four-cylinder engines of the front-wheel drive Audi 60 and Audi 100 to the rotary engine of the futuristic-looking NSU Ro 80. The idea to communicate this technological diversity as a competitive advantage came in 1970 from Hans Bauer. The employee in the Audi NSI advertising department devised the slogan that people around the world would come to recognize: “Vorsprung durch Technik.” 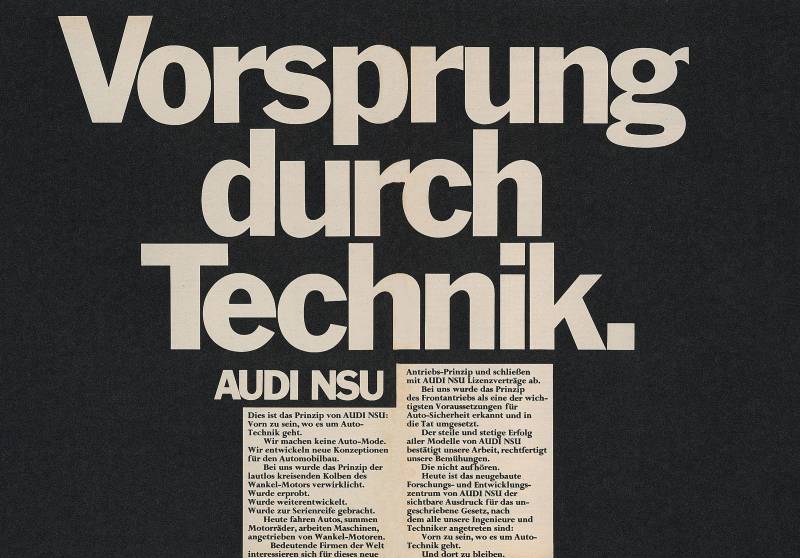 The new slogan made its first appearance in a large-sized ad in January of 1971. Soon, customers also saw it in Audi NSU brochures. Audi 100, Audi 100 Coupé S, Audi 80 or Audi 50 – they all now represented “Vorsprung durch Technik.” The slogan was adapted over the years in many ways, including “Audi. A nice bit of technology.” or “Audi. Relaxed driving with perfect technology,” but the company soon returned to the catchy original. With the introduction of the Audi quattro in 1980, the slogan was used more frequently in advertising. The largest illuminated advertisement in Europe at the time was installed on a high-rise along the A9 Autobahn at the exit for Ingolstadt-Nord: the reddish brown Audi oval with the slogan “Vorsprung durch Technik.” The slogan became a clear part of the Audi Corporate Identity by October 1986, when it was also used in the sales brochures for the Audi 80. Today, fifty years later, it’s synonymous with the company. 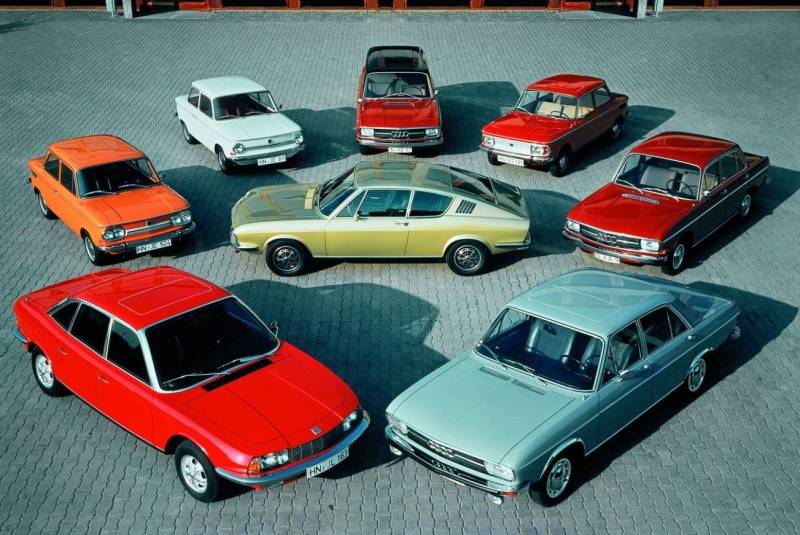 Changing technology
In a new special exhibit titled “50 Years of Vorsprung durch Technik” Audi will show visitors to the Audi Forum Neckarsulm its passion for technology throughout the years.

But which milestones laid the foundation for the fact that “Vorsprung durch Technik” continues to represent the drive for innovation at Audi and that the slogan is still used in all Audi advertising? Oliver Hoffmann, Member of the Board of Management of AUDI AG for Technical Development: “The most important milestone for me is quattro technology. Not only was it the foundation for our rally successes, it also represents the transfer of our experience from racing into serial production. Since then, quattro and Audi go hand-in-hand. Equally important was the first Audi A8 with Audi Space Fram technology in 1194, which helps us finally cement our place in the premium segment.”

The “decade of Audi” was kicked off in Le Mans in the early 2000s. With new technologies such as FSI, Turbo-FSI, laser light, Ultra technology and hybrids, the Four Rings dominated the renowned long-distance race as the unparalleled serial winner. The aluminum compact A2 1.2 TDI also made its debut: It was the first and, to this day, only four-door three-liter car.

The company made the next quantum leap in 2018 with the introduction of the Audi e-tron, the first fully electric Audi vehicle to go into serial production, boasting a range of 400 kilometers and blazing the trail for premium electromobility. Three years later came the market launch of the Audi e-tron GT, revolutionary in its design and proof that the future of e-mobility will be exciting. The new brand campaign “Future is an Attitude” underlines the future-oriented approach of Audi to continually question age-old views of mobility.

At the end of the 2010s, sustainability became a core company goal. “This is why Audi is consistently dedicated to the environment, pulling together numerous measures for resource efficiency and reducing the ecological footprint in its location-independent environmental program ‘Mission Zero,’” says Hildegard Wortmann, Member of the Board of Management of AUDI AG for Sales and Marketing. The goal: for Audi to be carbon-neutral by 2050. “We are developing into a provider of sustainable premium mobility and want to be a leader here. Which is why we are focusing our efforts to be a technological leader on environmentally friendly driving. It is in line with this that Audi will not be introducing any new models with combustion engines from 2026,” Wortmann explains. And the push for electrification continues: “We are redefining advancement and focusing on sustainability, digitalization and electrification. It’s about making a contribution to a livable future with meaningful technology.”

As for whether the societal push for new technologies makes it easier for Audi to continue to push this advancement, Hoffmann says, “It has always been our prerogative not to be driven by change but to be drivers of change. In the age of new mobility, we don’t just see advancement as the highest art of engineering, state-of-the-art design and a digital experience. We also think outside the car. In the future, it will be more about comprehensive mobility solutions, which includes the matter of infrastructure. With the pilot of the Audi charging hub, we have developed a flexible quick-charging concept for future peak demands that can be used at various locations.” And Wortmann adds: “Audi will not rest on the technological advancement of the past years. Audi is the most progressive premium brand because we always view the future as an opportunity and shape it actively. ‘Vorsprung’ is a state of mind."

03-11-2021 As communicated earlier this year, lead times for new cars remain longer than we…
Read more >