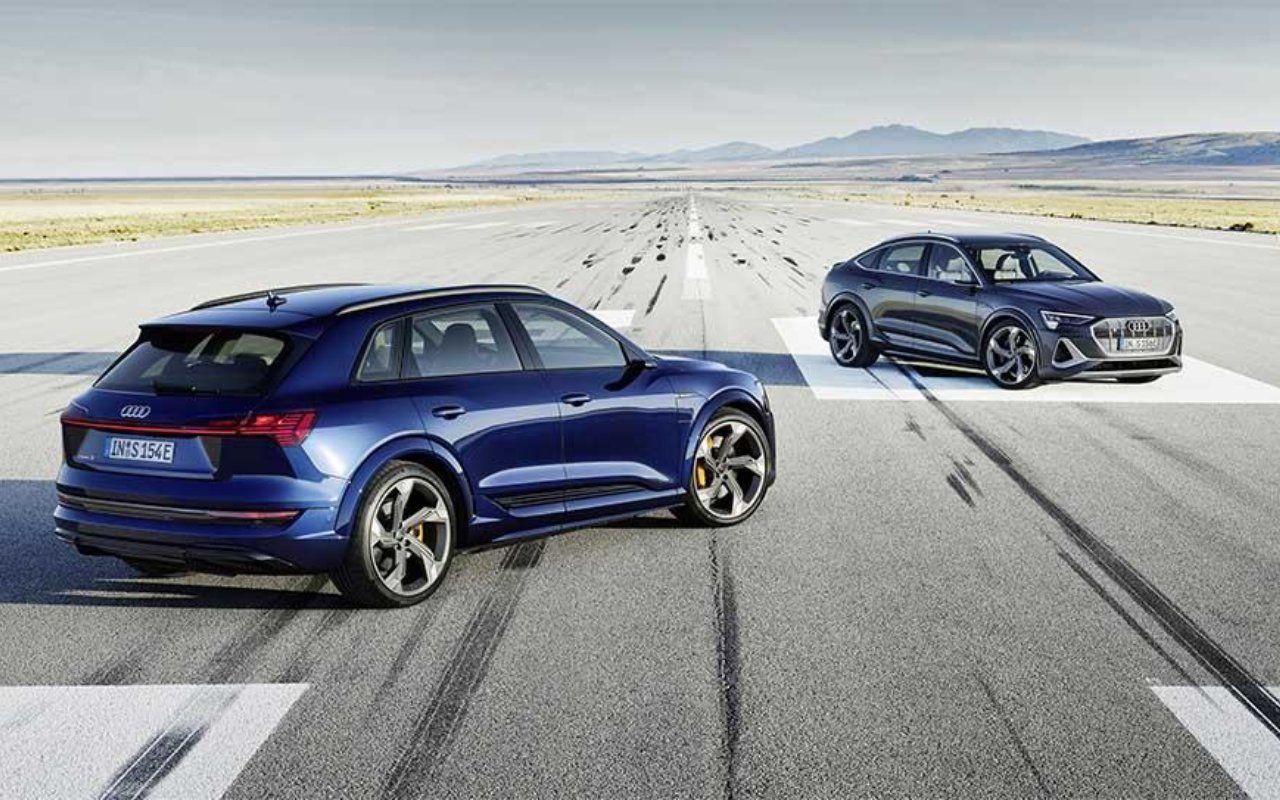 Audi has unveiled its new e-tron S and e-tron S Sportback, the first volume production BEVs to use the collective might of three electric motors to climb to a towering 973Nm torque peak. They also integrate intelligent drive control that elevates handling security and agility to a new level in the two all-wheel-driven variants.

The epic performance of the new S models more than befits the badge, particularly in S gear when the full arsenal of 370 kW of power and 973 Nm (717.6 lb-ft) of torque is available to the driver for eight-second boost periods. The standard sprint takes just 4.5 seconds and Vmax arrives at 130mph.

The new models are equipped with two electric motors on the rear axle and one up front, making them the first volume production electric cars in the world with three electric motors. 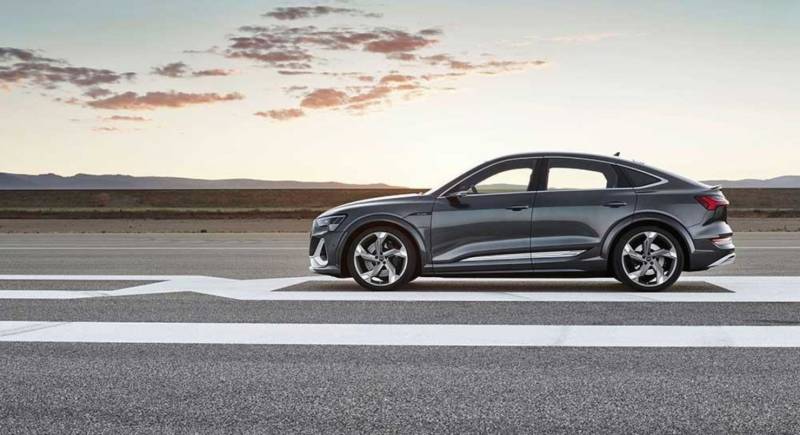 Their drive layout makes very effective use of the modular construction principle: here, the more powerful electric motor that powers the rear axle in the 'standard' e-tron 55 is installed in an adapted form on the front axle, while two modified examples of the front electric motor from the e-tron 55 operate at the rear.

The high-voltage battery has a gross energy capacity of 95 kWh, of which 91 percent (86 kWh) is usable. On a full charge, the Audi e-tron S and the Audi e-tron S Sportback can achieve ranges of up to 223 miles and 226 miles (preliminary values), respectively, based on the WLTP test cycle. 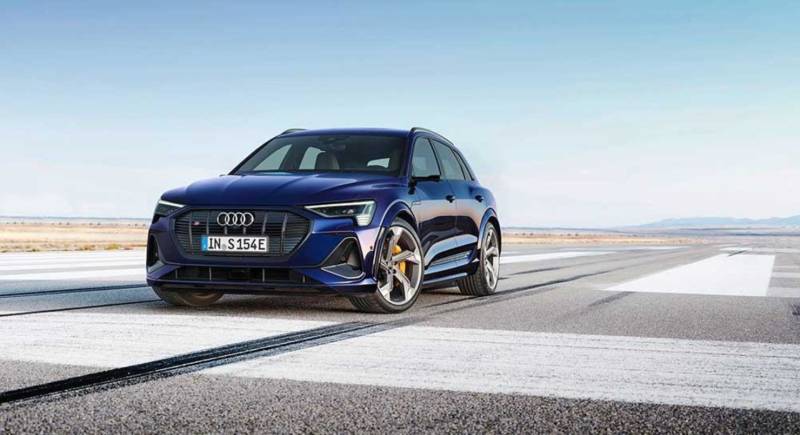 To improve efficiency, only the rear electric motors are engaged as long as the S models are operating in normal driving mode. The front electric motor is called into play when the driver demands more performance, or predictively before traction is broken.

Each of the rear electric motors sends its torque directly to the respective wheel via a single-speed transmission; there is no more mechanical differential. Need-based regulation takes just milliseconds and has a very high torque threshold. The excellent traction that this facilitates brings benefits across the spectrum of driving situations, but it is on challenging roads where the electric S models really come into their own. 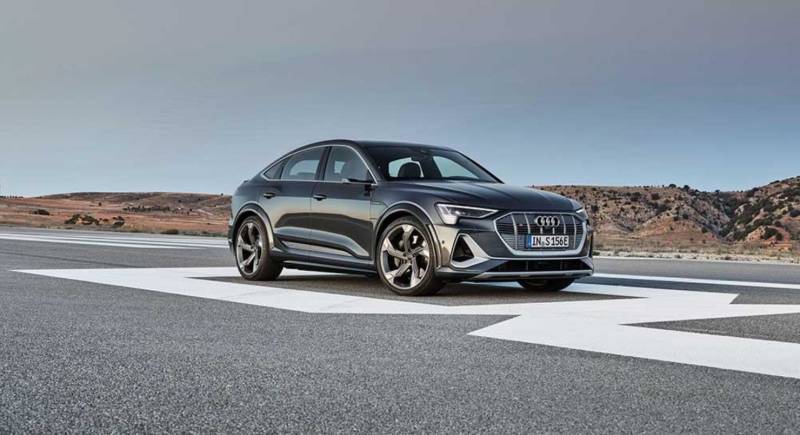 Their drivetrain has a more pronounced rear bias than in the standard e-tron models, and if the ESC stabilisation control is set to “sport” and the Audi drive select dynamic handling system to “dynamic” mode to maximise performance, their cornering attitude is even more adjustable, particularly in the transverse plane, and they have the capacity to perform controlled drifts.

When approaching the physical limit, the front wheel on the inside of the bend that is not under load is decelerated slightly via the wheel brake to prevent slip and further refine handling.

The ultra-sharp responses, high level of precision, and uncompromising safety are made possible through the close networking of all control units that manage the drive and suspension systems. 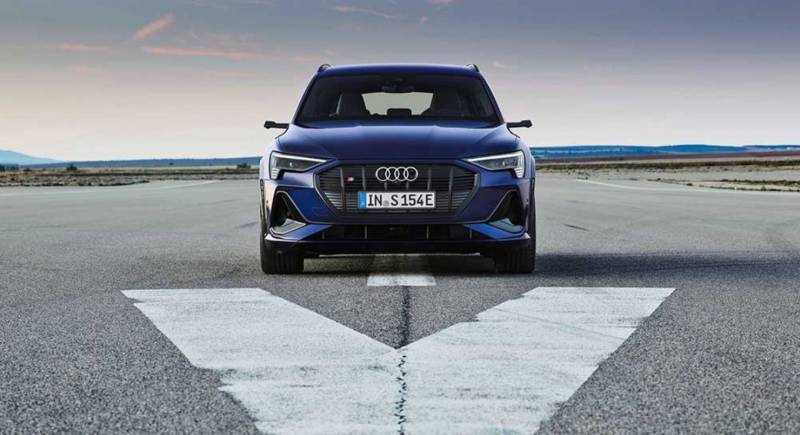 Networking: the suspension of the electric S models

The large high-voltage battery ensures a balanced distribution of the axle loads and is installed even lower in the car than the three electric motors, bringing the centre of gravity down in the interest of handling balance.

The ratio of the progressive steering becomes increasingly direct as the steering movement increases, in keeping with the car’s character, and the S-specific tuning of the adaptive air suspension complements its keen responses. The suspension has S-specific tuning and can vary the level of the body by up to 76 millimetres, depending on the driving situation and the setting specified by the driver via the standard Audi drive select system from its menu of seven driving profiles. 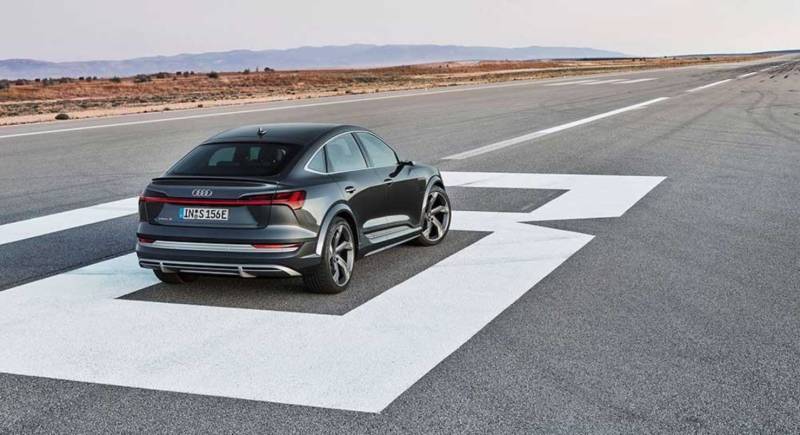 In the UK the electric S models are equipped with 21-inch wheels as standard, with a 22-inch wheel available at a later date as an option. They frame appropriately large disc brakes with fixed six-piston calipers upfront that is painted black as standard and feature the S logo, but on request can instead be painted in bright orange and decorated with the e-tron insignia.

The braking system is actuated and regulated via a compact module that controls the pressure build-up electronically (by wire), reinforces it electrically, and activates the brakes hydraulically.

An electric spindle drive actuates the displacing piston and brings the brake pads into full-pressure contact with the discs in just 150 milliseconds. Depending on the driving situation, the brake control system decides individually for each axle whether the car will decelerate with the electric motors, the wheel brakes, or a combination of both systems. 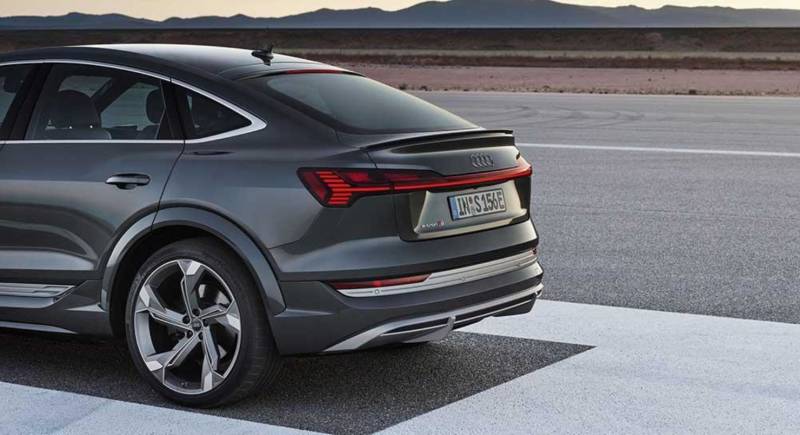 Aerodynamic performance in the e-tron S and e-tron S Sportback belies their classification and dimensions, particularly when the optional virtual exterior mirrors (cameras that send their pictures to high-contrast displays in the interior) are installed.

Further improvements come through the controllable cooling-air inlet with ducts to cool the front wheel brakes. It remains closed as much as possible so that the airstream flows over the bonnet with almost no turbulence. A heat pump is also part of the thermal management strategy in every e-tron. It draws heat energy from the waste heat of the drive components, thereby increasing the range by up to ten percent.

The sophisticated recuperation concept also contributes to the vehicle’s efficiency. Drivers can select between three recuperation levels, the highest of which allows them to experience ‚one-pedal driving‘. When braking, the electric motors alone decelerate up to 0.3 g of braking force, i.e. in most everyday situations. The hydraulic wheel brakes only come into play beyond that level. However, the electric motors remain active and can convert up to 270 kW of peak performance when braking from a speed of 62mph. 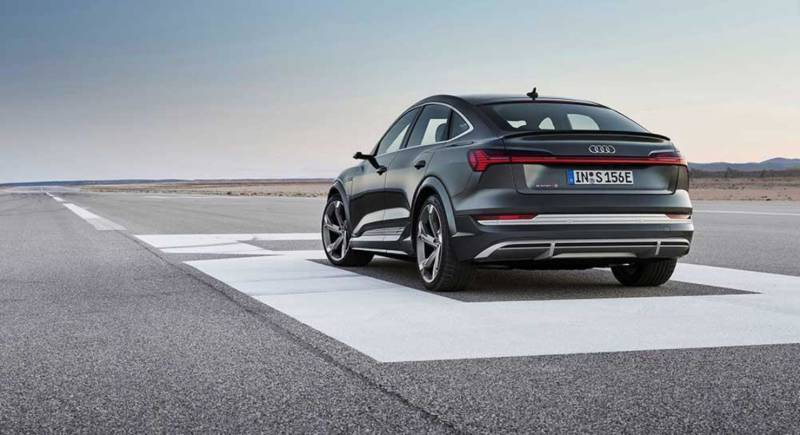 The significance of the time-honored 'S' badge is conveyed visually on these models by front and rear bumpers with pronounced contours and prominent inlets, by a rear diffuser insert spanning virtually the entire width of each body, and by wheel arches that are each 23 millimetres wider. Front and rear detailing in silver and trademark aluminium exterior mirror housings also confirm beyond doubt that these SUVs are members of the exclusive Audi S Quattro family.

Both cars can be equipped with Digital Matrix LED headlights as an option – another world first in mass production that Audi introduced with the e-tron Sportback in 2019. Each light is divided into 1.3 million pixels and can be controlled with great precision, opening up many new functionality opportunities. On narrow roads, for example, they can project light guides onto the road to show the car’s position in the lane and thus help the driver to remain safely in the centre.

Quiet confidence is exuded by the interior, which is finished in dark colours. Electrically adjustable sport seats finished in Fine Nappa leather and embossed with the 'S' logo are standard in UK versions, and are combined with decorative inserts in either brushed aluminium or, on request,  carbon. In the darkness, the atmosphere is enhanced by the contour/ambient lighting package.

As the most recent introductions to the fast-growing e-tron family the two new S models are naturally equipped with the digital MMI touch response control system with its two large central displays, and with the Audi virtual cockpit positioned directly in front of the driver, who can select a special e tron screen that focuses exclusively on the car’s electric drive functionality. A head-up display can also be added to project information even more conveniently onto the windscreen in the driver’s field of vision. 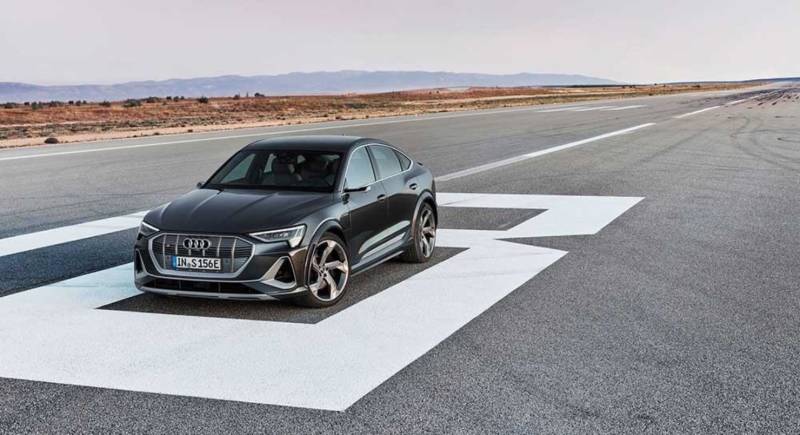 he MMI navigation plus control and infotainment system is also included as standard. Behind its many functions is the third generation modular infotainment platform (MIB 3), which completes all tasks at impressively rapid processing speeds.

As usual, MMI navigation plus works in tandem with Audi connect, which provides complimentary online services. Among these is the e-tron route planner, which calculates the fastest route including optimum charging stops, taking into account traffic data, the driver’s driving profile, and the duration of the charging stops, and in some cases may use this information to suggest an alternative route. The directory of charging points is updated online every day and can be set to prioritise charging stations along the planned route where the driver can pay using the e-tron Charging Service. 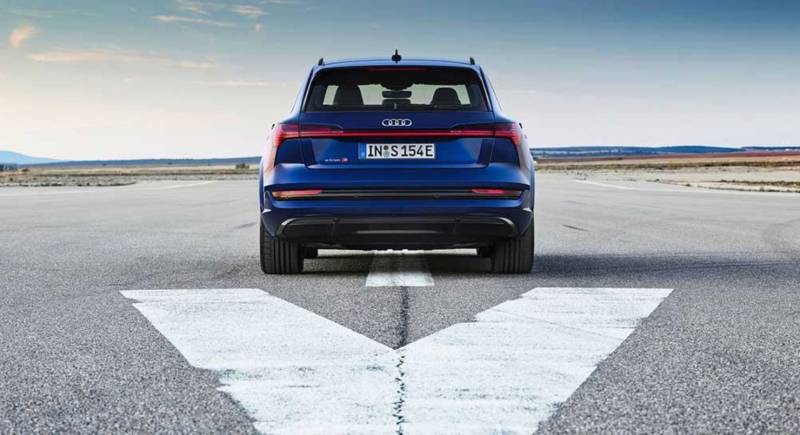