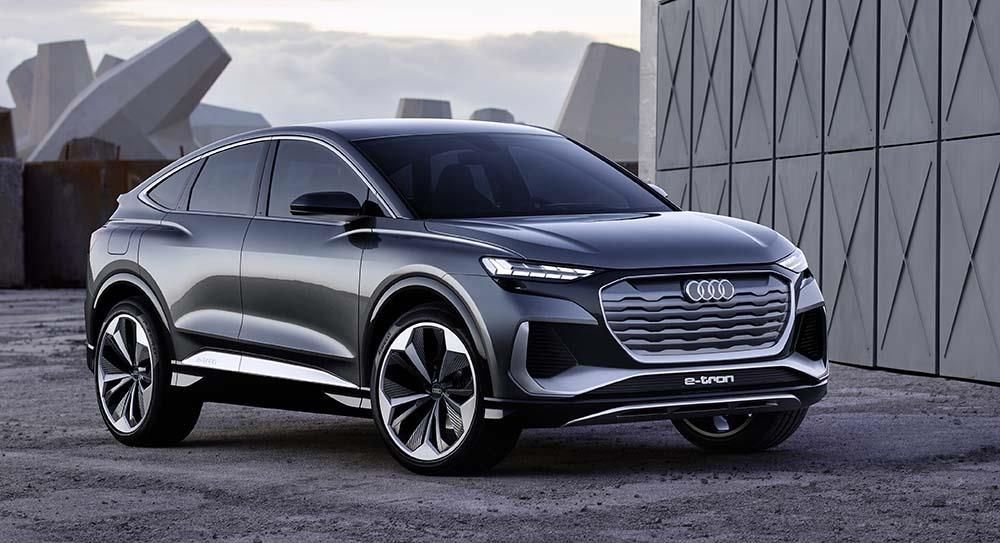 The striking SUV Coupé complements the 2019 Q4 e-tron concept and will form the basis of a series production model set to join the range in 2021.

Pure SUV or Sportback SUV with a dash of coupé extract? Audi Q3 and e-tron customers are already accustomed to choosing which of these silhouettes suits them best, and the unveiling this week of the new Q4 Sportback e-tron concept means the same dilemma will also soon face fans of the brand’s first fully-electric compact SUV.

The new Sportback study lines up alongside the Q4 e-tron concept, one of the leading lights of the 2019 Geneva Motor Show, and like its sister car is scheduled to enter series production in the near future as the seventh fully electrified Audi in the portfolio.

“With the Q4 e-tron concepts we are outlining our plans to cascade e-tron technology into the compact SUV class, and I think these studies clearly show that we will be downsizing without in any way downgrading,” says Director of Audi UK Andrew Doyle. “Like the two e-trons that paved the way for them both versions are hugely attractive interpretations of the SUV and Sportback brief underpinned by the very latest electrification technology delivered with characteristic Audi quality and ingenuity. I have no doubt that they will encourage wider acceptance of the benefits of electric driving, with the Audi e-tron range.”

The two Q4 e-tron concepts are notable as the first Audi models to be built on the Volkswagen Group’s modular electrification platform (MEB), which will provide the foundations for numerous electric vehicles from the compact class upwards in the future.

Their measurements are almost identical – they share the same 1.9-metre width and 2.77-metre wheelbase, but at 4.6 metres in length and 1.6 metres in height the Sportback is fractionally longer and lower, with just one centimetre separating the duo in each dimension. 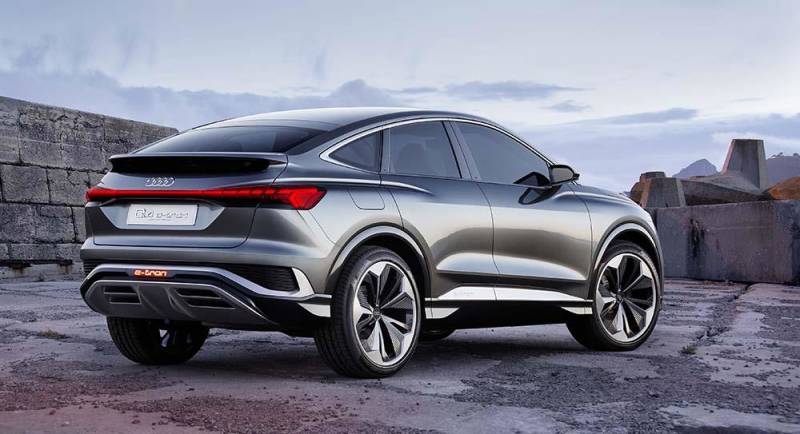 The two concept cars are also twins in technological terms, and give a clear indication of the direction Audi engineers are taking for the powertrain of ‘performance versions’ of the series production model. Two electric motors mobilise 225 kW of system output which is sensitively handled via quattro all-wheel-drive as is typical for Audi. Thanks to excellent traction, both versions of the Q4 accelerate from zero to 62mph in just 6.3 seconds and are restricted to a top speed of 111mph.

The potential range of up to 310 miles

Spanning almost the entire length of the underbody area, the large battery that brings the Q4 Sportback e-tron concept to life has a capacity of 82-kilowatt hours, giving a WLTP-certified range of up to 279 miles that sets a new benchmark in this class. Versions with rear-wheel drive will push on even further, covering a range of up to 310 miles based on WLTP test data.

The silhouette of the Sportback arcs rearwards in a subtle and dynamic curve. Its roofline transitions into the significantly inclined D-pillars and ends in a horizontal spoiler at the level of the lower window edge. As a result, the future Audi Q4 Sportback appears much longer than its sister model, the Q4 e-tron concept.

At the rear, the broad light band connecting the two lamp units and the bumper diffuser unit with its horizontal slats and illuminated e-tron logo suggest power and technological sophistication and also serve as key hallmarks uniting the two Q4 models. The inside of the lights, with their significant sweep of LED segments, also provides a visual link with the Q4’s big brother, the e-tron Sportback.

Viewed from the front, the familiar octagonal Singleframe with its four rings immediately identifies the Q4 Sportback e-tron concept as an Audi, and on closer inspection, the structured closed surface within it that replaces the traditional radiator grille confirms that this one is not powered conventionally. 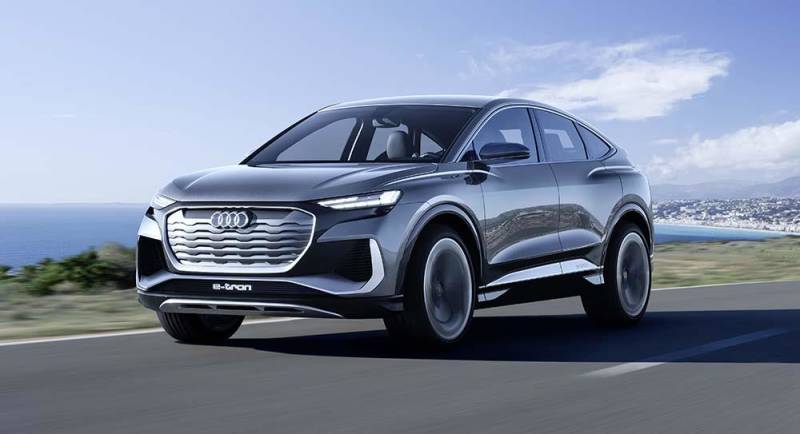 The prominent wings are another classic Audi design feature that has stood the test of even more time - in fact almost exactly forty years since the arrival of the legendary original quattro in 1980 – while the accentuation of the rocker panel area between the axles, where the battery and thus the powerhouse of this SUV is located, is a characteristic e-tron feature. Large 22-inch wheels also emphasise the sinewy stance of the newest member of the Audi family.

The Q4 Sportback e-tron concept is painted in the new colour kinetic grey, a light metallic and pearl effect colour that also displays hints of green when viewed from certain angles. In contrast, the lower sections of the body are finished in dark grey. This segmentation emphasises the width and horizontal orientation of the body architecture.

The Audi Q4 Sportback e-tron concept will rank among the largest SUVs in its segment in terms of exterior dimensions, and the generous 2.77-metre wheelbase that works in favour of its composure and agility also facilitates interior accommodation comparable with the class above. With no need for a transmission tunnel, the Q4 Sportback e-tron concept offers unrestricted space and comfort, especially with regard to front and rear legroom.

Sustainability was a key consideration in the design of the décor - the floor covering is made of recycled materials, and instead of chrome-plated metal decor frames, the surfaces are covered with a high-quality multi-layer paint finish.

The Audi virtual cockpit in the binnacle behind the steering wheel provides speed, charge level, and navigation information with pin-sharp clarity, while the large-format head-up display with an augmented reality function is a new feature. It can superimpose important graphic information, such as directional arrows for turning, directly onto the road.

Above the centre console, a 12.3-inch touchscreen tilted towards the driver provides access to the infotainment and vehicle functions. A strip of buttons for controlling the air conditioning is located below it. Frequently used functions can also be selected conveniently via control panels designed as touch elements on the steering wheel spokes.

As the centre console does not need to hold functional elements such as a gear lever or hand brake actuation elements, it is repurposed as a spacious storage compartment that includes a mobile phone charging cradle. A horizontal area houses the selector button for the transmission mode and also serves as a cover for the front section of the console.

The modular electrification platform (MEB) will offer a broad range of electric drive variants and power levels, including the performance version installed in the Audi Q4 Sportback e-tron concept. Here, the front and rear axles are each powered by an electric motor - this Q4 Sportback is a quattro. As there is no mechanical connection between the axles sophisticated electronic control ensures that the torque is apportioned exactly as the situation and conditions demand, and does so in fractions of a second.

That allows the SUV Coupé to achieve optimum traction in all weather conditions and on any type of surface. 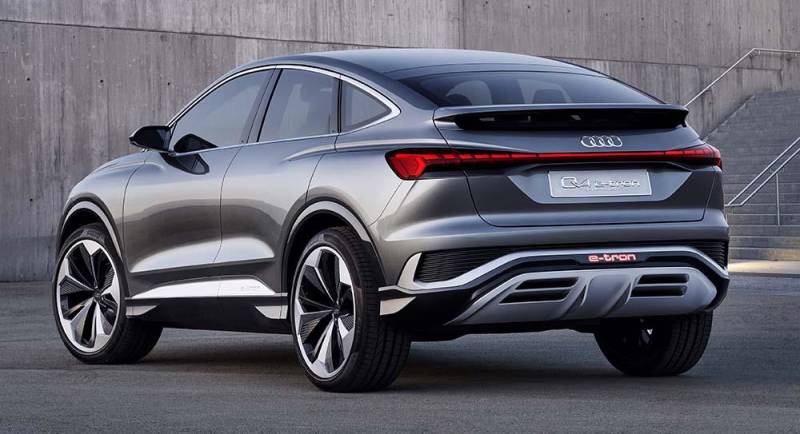 In most cases, the Q4 Sportback e-tron concept mainly uses its rear electric motor, a permanently excited synchronous unit, in order to achieve the highest efficiency. If the driver demands more power than it is able to supply, the electric all-wheel drive uses the front asynchronous motor to redistribute the torque as required to the front axle. This also happens predictively even before slip occurs in icy conditions, during fast cornering, or if the car understeers or oversteers.

The electric motor on the rear axle has an output of 150 kW and delivers peak torque of 310 Nm (228.6 lb-ft); the front unit supplies the front wheels with up to 75 kW and 150 Nm (110.6 lb-ft). The system output is 225 kW. The battery in the vehicle floor has a maximum charging capacity of 125 kilowatts, equating to a minimum charging time of 80% of around 30 minutes at rapid chargers. It can store up to 82-kilowatt hours, which allows for a range of more than 279 miles according to the WLTP standard.

This excellent range can be attributed to far more than just an energy storage unit with a large capacity. With a drag coefficient of just 0.26 – 0.01 below the Q4 e-tron SUV – the Sportback concept spears through the air with a low aerodynamic drag that works in favour of charge conservation. Its ultra-intelligent recuperation system also plays its part, as does the complex thermal management technology supporting its drivetrain and battery, which is optimized by a CO2 heat pump.

MLB, MQB – modular longitudinal platform and modular lateral platform: These component systems for vehicle development represent a great success story for Audi and the Volkswagen Group. While they were designed primarily for the use of combustion engines, the modular electrification platform (MEB) has been engineered specifically and exclusively for cars with electric drive systems. Axles, drives, wheelbases and the interaction between all components have been selected and tailored specifically for e-mobility.

The placement of the large-volume battery units and their geometry can therefore be optimised without having to make concessions to other drive concepts that must always be taken into account in the MLB and MQB.

At the same time, the MEB provides huge scope for synergies. This platform serves as the basis primarily for electric cars in the high-volume A segment. It allows the best technology available to be developed jointly across brands and used in many different electric cars. The MEB thus also helps electric mobility to break through even in the particularly price-sensitive compact segment. 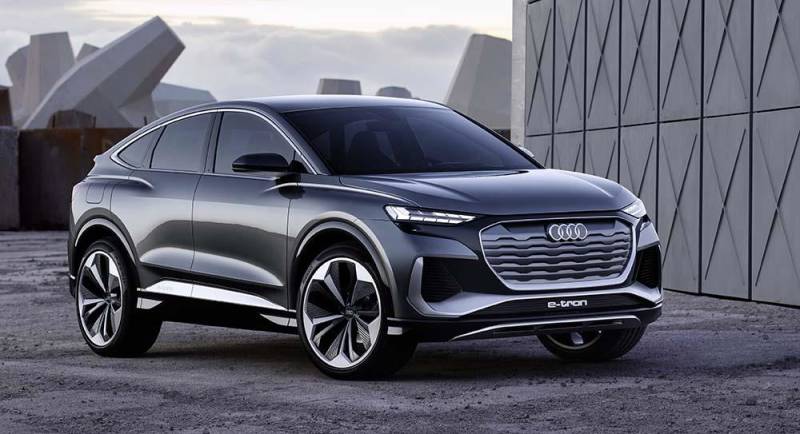 Audi launched its electric offensive with the world premiere of the all-electric Audi e-tron SUV in September 2018.

By 2025, Audi will offer more than 20 models with all-electric drive in the most important markets worldwide and achieve roughly 40% of its sales with electrified models. The SUVs within this portfolio include the e-tron and the e-tron Sportback. In addition, there will be a range of models with classic body layout such as Avant and Sportback. The range will cover every relevant market segment from the compact class to the luxury class.

All specification, performance and consumption details relate only to the concept and may differ from those on the final production version.